“You’re invited to a Look at the Future of Gaming,” A phrase that Google’s Stadia and Microsoft’s Xbox Series X used to describe their Consoles but one failed miserably and the other shows promise, now its Sony’s turn to show us what they are up to with the Playstation Five. Coming June 4th, there will be a first look at the PS5, we got a chance to check out the Unreal Engine demo for the new console on May 13th; Jim Ryan, President, and CEO of Sony Interactive Entertainment posted this invitation yesterday:

“With each generation, from the first PlayStation to PlayStation 4, we aim higher and we push the boundaries further, to try and deliver better experiences for our community. This has been the mission of the PlayStation brand for more than 25 years. A mission I have been a part of nearly since the beginning.

There are few things as exciting as the launch of a new console. While this road to launch has been a bit…different, we are as thrilled as ever to bring you with us on this journey to redefine the future of videogames.

We’ve shared technical specifications and shown you the new DualSense wireless controller. But what is a launch without games?

That’s why I’m excited to share that we will soon give you a first look at the games you’ll be playing after PlayStation 5 launches this holiday. The games coming to PS5 represent the best in the industry from innovative studios that span the globe. Studios, both larger and smaller, those newer and those more established, all have been hard at work developing games that will showcase the potential of the hardware.

This digital showcase will run for a bit more than an hour and, for the first time, we will all be together virtually experiencing the excitement together. A lack of physical events has given us an amazing opportunity to think differently and bring you on this journey with us, and hopefully, closer than ever before. This is part of our series of PS5 updates and, rest assured, after next week’s showcase, we will still have much to share with you.”

The Fun begins on June 4th on their Twitch Channel and YouTube Channel at 1:00 pm PDT. 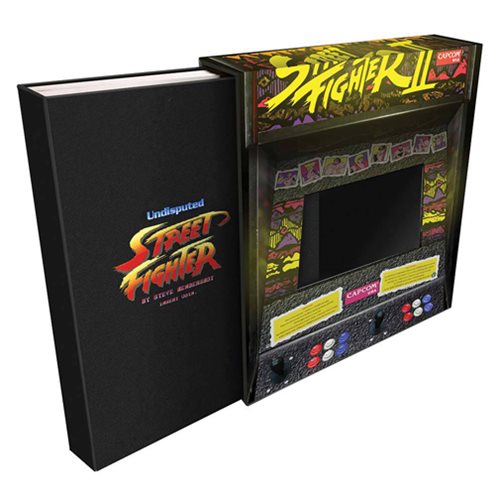 The Undisputed Street Fighter Deluxe Edition Hardcover Book includes its own unique matte cover art, and a ribbon bookmark. The hardcover book will fit effortlessly into glossy, die-cut slipcase designed to resemble your favorite arcade game. The high quality folded sleeve will contain 3x Street Fighter art prints and 1x papercraft folded model. Since its inception 30 years ago, the Street Fighter video game series from Capcom has thrived based on a lethal combination of innovation, style, and technique. From first-of-their-kind advances such as selectable characters and secret combo moves to imagination-capturing characters such as Ryu, Chun-Li, and Akuma, Street Fighter has stayed a step ahead of the competition en route to becoming one of the most enduring and influential franchises in video game history. The Undisputed Street Fighter Hardcover Book features in-depth interviews and exclusive, behind-the-scenes looks into the making of the Street Fighter games, and the iconic art, design, and imagery from across the Street Fighter universe.