Black Panther- A Nation Under Our Feet Volume One

The latest review for Black Panther: A Nation Under Our Feet Volume One.

I’m reviewing another Story from writer Ta-Nehisi Coates, last time we looked at his take on Captain America, now it’s time to look into his time with another well-known hero, the Wakandan King T’Challa, the Black Panther! In ‘A Nation Under Our Feet’ Book One, T’ Challa not only has to confront how tough it has become in Wakanda due to the dramatic upheaval, but a Super-Human group known as ‘The People‘ also sparked a violent uprising, Wakanda was known for its Technology and proud Warrior Traditions is in utter turmoil, can the Mighty Nation adapt with the changes? And what about the King? Can the Monarch, one in a long line of Black Panthers survive? In Book One, it collects Issues One through Four and Fantastic Four #52 (T’Challa and Wakanda’s debut). Without further ado, let’s get this review going!

With it living up to its name ‘A Nation Under Our Feet’ Writer Ta-Nehisi-Coates and Artist Brian Stelfreeze asks the question What is a Nation? What’s a King’s Duty, lastly, What is his responsibility to his people? While taking advantage of the one characteristic that makes this hero different from the rest is that he isn’t just a vigilante or a crime fighter, he is a King; and like most kings, they have to make the most difficult decisions, in this case, using lethal force on his own people. The Book may be named ‘Black Panther’ but it isn’t just about T’Challa, we get a fantastic cast of characters, for example, his wise Stepmother, his former bodyguards, heck, even his opponents, they make good arguments against him. The last part of this Graphic Novel raised an interesting questions, what if T’Challa was wrong? Has an advanced Civilization such as Wakanda moved on from needing a King?

Speaking of Characters, let’s discuss a few that have made this story memorable so far, T’Challa’s Former Bodyguards, Dora Milaje “The Adored Ones” Aneka and Ayo were the King’s elite Amazon Bodyguards, in the beginning, Aneka was arrested and sentenced for extra-judicially executing a violent rapist. Ayo then stole two prototype suits, breaking her lover Aneka out of Jail and together, they become the Midnight Angels, protecting Women of Wakanda from Patriarchal Violence. Over all, this series was one of the best books that Marvel had to offer in 2016, Ta-Neshi Coates and Brian Stelfreeze are a great Creative team, the story so far is phenomenal and the artwork is outstanding. Be sure to be on the lookout for the review of the next volume soon! 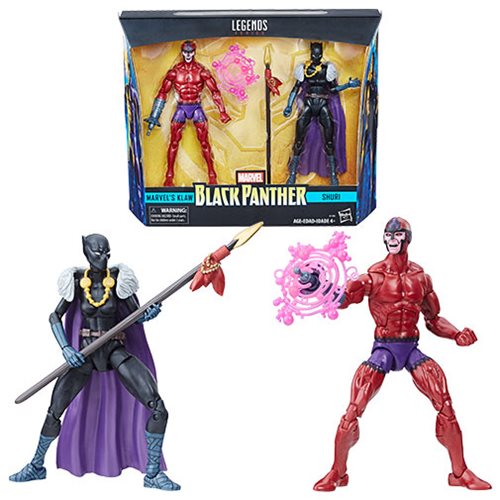 A Toys R Us Exclusive! Get two awesome 6-inch figures with accessories with the Black Panther Marvel Legends Shuri and Klaw 6-Inch Action Figures – Toys R Us Exclusive set. Master innovators with a long history of modifying and manipulating Vibranium, Shuri and Klaw share similar interests, but drastically different motives. While Shuri works to create technology that can help protect the Black Panther and the kingdom of Wakanda, Klaw is more interested in turning a profit by creating powerful weapons that can devastate civilizations. Collectors, fans, and Marvel enthusiasts alike can imagine iconic moments from the Black Panther comics with this premium Marvel Legends Series 2-pack featuring 6-inch-scale hero Shuri and villain Marvel’s Klaw figures. Each figure features premium design and detail and includes a character-inspired power accessory. Figures also feature premium articulation for poseability and display in collections.