The Newest Review of My Dress-Up Darling Series Premiere is now live! The beginning of a unique relationship, click on the link in our bio for more info
Kazuya's Girlfriend Woes are making a comeback in Rent-A-Girlfriend's Second Season, coming July 2022
Emergency Meeting!
GKIDS takes fans into the Mysterious World of "U" ahead of the US Premiere of Belle, sharing two new dub clips on their YouTube Channel, read more on our website! Link is on our bio!
50 Years of Superhero Action, Kamen Rider Celebrates with a Brand New Art Exhibition
The CW Network, home for popular shows Riverdale, Nancy Drew, and DC Comics Superhero TV Shows is for sale, much to its Critics Delight.
Chainsaw Man and Jujutsu Kaisen Tears Their Way Into the Top Ten in The NY Times Best Seller Graphic Novels and Manga List for January 2022.
It's our first review of 2022 and My Hero Academia Team-Up Missions Volume Two has humor, action and so much more! Check out the review on our site, the link is in our bio!

ABC has announced its summer programming schedule, including the premiere date for the final season of “Agents of S.H.I.E.L.D.” Clark Gregg, Ming-Na Wen and co. will return for one last ride on May 27 at 10 p.m. News that season 7 of the Marvel series would be its last emerged back in July 2019, the same day the cast and creators held a panel at San Diego Comic-Con in Hall H. ABC is the first of the big four networks to unveil its summer schedule amid the coronavirus pandemic chaos, and is moving up its traditional lineup of game shows from July to May. ABC already had to cut short several of its biggest scripted offerings, including “Grey’s Anatomy.” 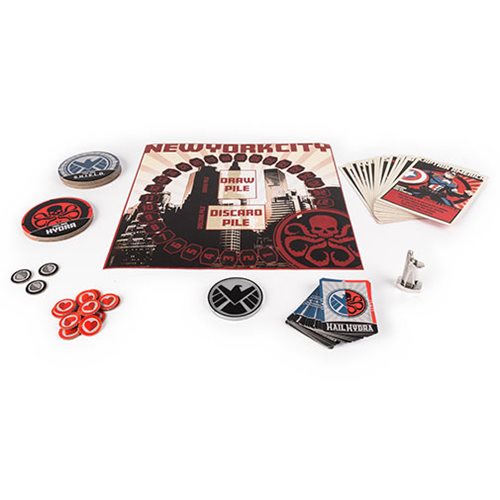 The Marvel Hail Hydra Board Game is the social deduction game that has players take on the role of S.H.I.E.L.D. agents defending the world against HYDRA. The twist is that one or more of the players are actually members of HYDRA that are secretly sabotaging the same efforts to save the world. This game is a must-have for the core Marvel fan and collector. Play as your favorite Marvel heroes (14 included) to save New York City from destruction. Try to identify which players have hidden HYDRA agents sabotaging your efforts. Embrace the mystery as subterfuge takes the center- stage in this epic battle between S.H.I.E.L.D. and HYDRA. The Marvel Hail Hydra Board Game is a great addition to your next game night. For 5 to 8 players.