Continuing on from our review last month, I do apologize for not keeping up to date on the Anime Reviews, the Holidays are coming up and trying to catch up on Anime I missed. Things are beginning to pick up on My Hero Academia, Deku’s Humor was put to the test! Unfortunately, he didn’t do so well as it looked like Deku was about to be dismissed by Sir Nighteye and his Agency but Nighteye put the young hero through another test but this time Nighteye used his Quirk during the test.

After the test was over he noticed Deku’s movements were similar to another hero, and that he avoid hitting the owner’s All-Might Merchandise; with passing the test Nighteye gave Lemillion, Deku, and Bubble Girl their first Hero-Work Study; to begin patrolling and continue their investigation of the masked villain known as Overhaul. We also learned that this new villain has waged War with the League of Villains, today we’re going into our review of the four episodes of My Hero Academia.

The beginning of Episode 67 was intense, something that fans have grown accustomed to when the introduction of a new villain comes into the picture, Overhaul is no exception in this case as we’re introduced to another character that manga readers are familiar with and her name is Eri, here we see the difference between Izuku and Miro instantly, Izuku nervous but also ready to defend her immediately if needed; while Miro knows it isn’t the time or the place for immediate action, he might not show it but he feels the same as Izuku does. In perspective, I thought this was well done by Bones Studio (In terms of Animation and directing the scenes, combining the right music with the right emotional tone.) Another scene that struck me was Nighteye and All-Might’s falling out, the thought of the Symbol of Peace’s Death and losing his partner was unbearable; All-Might wasn’t just a hero or a Partner but a friend.

Moving forward to Episode Sixty-Eight, when discussing Overhaul and Eri, back in Episode Sixty-Seven he was taking her to an Experiment room, but what for? (Manga Readers will know, but out of respect for readers who haven’t read the Manga and only watch the Anime, I won’t spoil it.) We aren’t for sure as we get to see the No. 9 Hero Ryukyu while Uravity, Froppy, and Nejire-Chan team up to take down villains while training under her and her Agency; she mentioned to the trio that they might join in on the investigation that Sir Nighteye and his agency is currently conducting on Overhaul. The action in this episode was incredible, especially during the heroines fight with the villains, the BONES studio has a good reputation when it comes to animating action scenes (dramatic scenes too) for example, shows like Wolf’s Rain, Fullmetal Alchemist, Eureka Seven, and Soul Eater, the list goes on but the point I am trying to make is that with how much the battles start to step up, so does the drama too; the art and animation team realize that and their hard work shows with each scene.

The past few episodes we have seen the animosity between the League of Villains getting pretty intense, Tomura and the Shie Hassaikai began their Black Communion, both similar in many ways but neither trust each other, they only look to be a partnership. But this episode is more of Kirishima episode in terms of Character development; he began his hero-work study in Fat Gum‘s Agency, we see another battle with villains involving Fat Gum, Tamaki (SunEater) and Red Riot ensue as Fat Gum and Tamaki round up the other villains, Kirishima battles a Villain that can create sword blades within his own body and unleashes it against Red Riot, we finally see his special move ‘Red Riot: Unbreakable!’ In action. 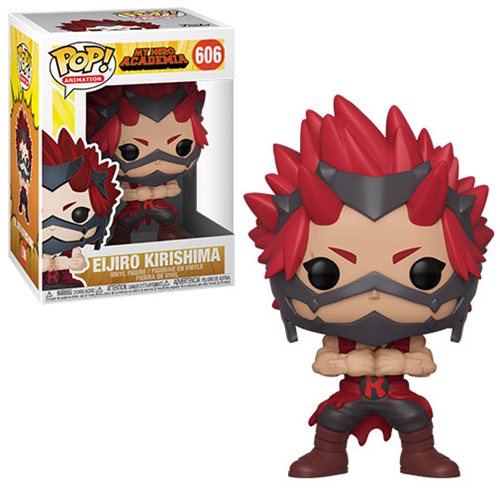