This was a recommendation from someone I spoke to at a local comic book store, The Immortal Hulk is one of the hottest books Marvel has today, written by Al Ewing and Illustrated by Joe Bennet, today we’re reviewing Issues 1 through 13, Bruce Banner is back whether he likes it or not; but something has changed within Bruce, at night he becomes something dark, something horrific.. And that is the Immortal Hulk. Time to step through the Green Door, the Review begins now!

I have read some creepy stories throughout my life but seeing The Hulk in a Darker, Horrific tone is something different and by far the most fascinating thing I have seen in quite some time; Al Ewing has shown that Hulk may have the brawn and the brains but he can also have a dark side. With each issue, we see that there is something different with this version of the Hulk; shrouded in mystery and different from the last time we have seen him. Ever since the events of Civil War II, The Hulk has changed, Hawkeye carried out Banner’s request; by being shot with a gamma-irradiated vibranium arrow through the brain.

Ewing doesn’t get all of the credit in showing how horrific The Hulk can be, Joe Bennett’s artwork brings Bruce’s turmoil and Hulk’s presence out incredibly well; Banner may have had lived a tortured life but he also shows that he can take what anyone dishes out. The battles throughout these issues, ‘whoa’ was the only phrase I could think of describing them, whether it be with Sasquatch, the Absorbing man… It is absolutely without a doubt a hellish joyride of a story to read.

Final Grade: 10, Visually Striking, Horrific and Suspenseful, Al Ewing and his creative team shows that not even death cannot keep The Hulk down. 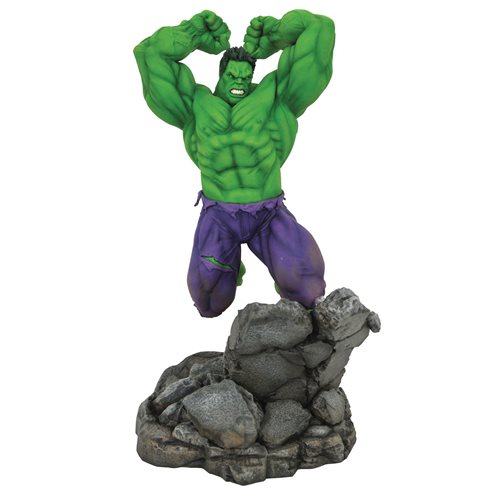 One thing you know for sure about this incredible Marvel Premier Comic Collection Hulk Statue is that it’s smashingly good! Measuring roughly 17-inches tall, it shows Bruce Banner’s green-skinned alter ego leaping from the rocks and into the action to lay the smash down and put the hurt on the unfortunate object of his rage. Sculpted in scale with other Premier Collection statues (sold separately), this dynamic piece features detailed sculpting and paint applications and is limited to 3,000 pieces. Each comes packaged with a numbered certificate of authenticity in a full-color window box. Order yours now so you don’t miss out!