While it was announced in May, we finally got our first look at that loveable, explosive Arch-Wizard Megumin’s new spin-off series, Konosuba: An Explosion on This Wonderful World! Adapted from the wonderful light novel series written by Natsume Akatsuki and illustrated by Kurone Mishima.

The explosive new trailer was bursting with visions of the backstory of Megumin. The series will be directed by Yujiro Abe at studio Drive (VLAD LOVE) under the supervision of main series director Takaomi Kanasaki, with the return of Makoto Uezu as series composer and Koichi Kikuta as character designer as well.

Yen Press publishes the Light Novel Series for English Audiences, the description for the series is listed below:

One year before a certain useless goddess and NEET extraordinaire hit the scene, Megumin, the “Greatest Genius of the Crimson Magic Clan,” is hard at work. Ever since a life-changing encounter in her youth, the young wizard has dedicated her every waking moment to the pursuit of the ultimate offensive magic, Explosion! (Well…every moment not spent hustling food from her self-proclaimed rival.) And while the big sister’s away, the little one will play. On a routine trip into the woods, Megumin’s little sister, Komekko, finds a strange black kitten. Little does she know that this cat plays a key role in unsealing a Dark God’s tomb… 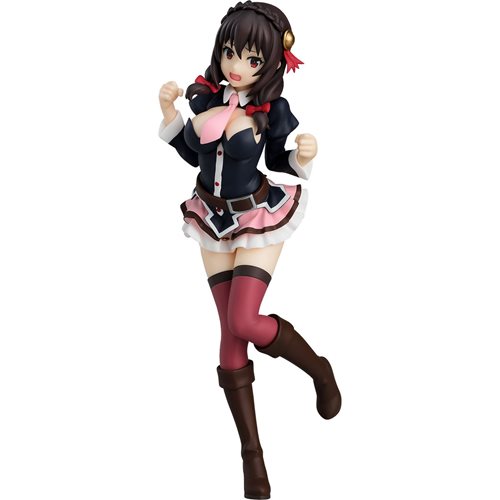 From the anime series KonoSuba: God’s Blessing on this Wonderful World! comes a Pop Up Parade figure of the self-proclaimed rival of Megumin, Yunyun! Be sure to display her with other figures from Konosuba!