It began 30 Million Years ago, an Ancient Ultraman who once fought against the Darkness and Survived, now finds itself awakened in the Modern Day after a long slumber, he is Ultraman Trigger!

Following up on our previous review of Ultraman Z, this series is the 33rd Series in the Ultraman line and the third in the Reiwa Era, a modern retelling of Ultraman Tiga, which also is celebrating its 25th Anniversary. It premiered in July 2021 and since its premiere, it has received positive reviews and has captured the imagination of three generations of fans, captivating the parents and children of the “TDG” generation and new fans alike, according to a press release from Tsuburaya Production for Ultraman Chronicle D.

Joining the new series was Tokusatsu Veteran, Koichi Sakamoto, becoming the Series Director who stood by his motto “Wanting to make everyone smile.” The protagonist “Kengo Manaka,” a human imbued with light, and once more he stands against monster attacks and the dark forces to protect the Earth, will be played by Matsuri Nine‘s leader Raiga Terasaka. Three familiar actors have also made an appearance in this series, M.A.O., Sumire Uesaka, and Kei Hisogai.

In recent shows, they would already introduce the whole cast, but in its premiere episode, Trigger takes things slowly and uses only a handful of them to utilize to get the show going, but there are plenty of Tiga Era references in this series, which impressed me the most was to have it take place on Mars in the beginning, Tsuburaya Productions has always been known to try something new, and Mars’ rocky landscape was the perfect spot for an intense battle. Speaking of battles, the Kaiju looked magnificent in this series, we saw familiar foes such as Gomora, Aboras and Banila, Zaragas, and Alien Barossa come face to face with Trigger and the GUTS-Select Crew.

It was known that Trigger would have limited abilities at first, but throughout the season we watched Kengo and Trigger get stronger and grow (I swear, this wasn’t a Tokusatsu Pun) into their aptitudes and powers but it also goes the same for Carmeara, who was the leader of the Giants of Darkness, and at one time was the former lover of Ultraman Trigger/Trigger Dark. Out of the trio, she was the strongest adversary of Kengo Manaka who she believes “stole” Trigger from her. Darrgon, a Giant of Darkness who had a strong sense of honor and Herculean strength, and Hudram, the last of the trio had the desire to overthrow Carmeara and become the leader once and for all.

Earlier it was discussed that there were familiar foes, but there were also familiar allies too, without going into detail due to avoid spoiling it for readers who haven’t seen the series. The CGI has improved, the use of it in certain action sequences and monster abilities have stepped up this time. Overall, Ultraman Trigger: New Generation Tiga honors the past legacy and offers fans a balance of humor, light-hearted fun, and of course, Kaiju fighting and Action! You can catch the series on Tsuburaya Productions Ultraman YouTube Channel and the new movie that is set to premiere in March, Ultraman Trigger: New Generation Tiga, Episode Z.

“30 million years ago, the world was engulfed in the terrifying darkness. But that darkness was sealed deep in space by the Giant of Light.

But that darkness was sealed deep in space by the Giant of Light. His power spent, the Giant of Light sleeps in the red star, and is forgotten to time… The Terrestrial Peaceable Union hurries to gather the expert team GUTS-Select, while Kengo Manaka lives peacefully on now-colonized Mars as a botanist.

However, his peaceful life suddenly comes to an end one fateful day. The darkness that the ancient civilization sealed away breathes once more!

As a monster bears down on the Martian settlement, Kengo’s fate leads him to a chance encounter.

A chance encounter with none other than the sleeping Giant of Light. How will Kengo’s meeting with the Giant of Light influence his destiny and the destiny of Earth?

The Giant of Light is reborn after an eternity. His name: Ultraman Trigger!“ 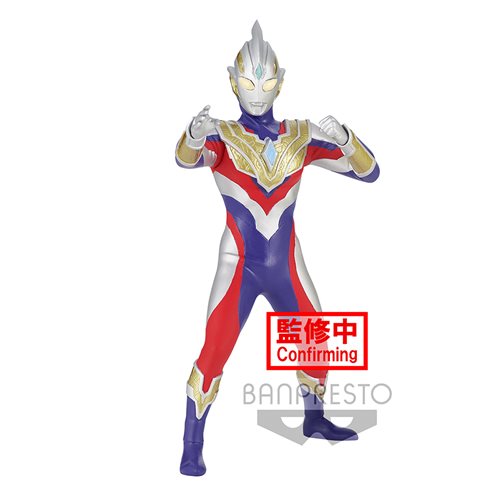