Preparing for the upcoming Mortal Kombat film, I decided to jump in on the gaming nostalgia and watch Warner Bros. Animation and Studio MIR’s Mortal Kombat Legends: Scorpion’s Revenge. Our story focuses on one of the fiercest Kombatants named Hanzo Hasashi, who was not only the Grandmaster of the Shirai-Ryu Clan but better known as Scorpion.

When his family and clan are slaughtered by a rival clan called the Lin Kuei and their Grandmaster, Bi-Han (Sub-Zero) murders Hanzo after the vengeful Grandmaster killed and The Lin Kuei’s Clan members but Hasashi finds himself not only resurrected but in the NetherRealm, meeting the sorcerer Quan-Chi.

The Sorcerer persuades the Grandmaster to participate in an Inter-Dimensional tournament called Mortal Kombat to not only steal Shinnok‘s Amulet but to get revenge on the man who killed his Clan and his Family. Hanzo agrees to fight in the tournament but as Scorpion. Meanwhile, on Earthrealm, the Thunder God Raiden prepares his fighters and their champion, the Shaolin Monk named Liu-Kang.

Fighting alongside the Monk is the fierce Special Forces Agent Sonya Blade and the Hollywood Action Star Johnny Cage. Sonya is not only searching for Maj. Jackson “Jax” Briggs but also searching for Kano, the Leader of a Crime Syndicate called the Black Dragon, while the out-of-work actor believes he is on the set for a major film.

It’s time to Test Your Might, let’s begin the review!

This was not the first time a company has produced an animated project based on the Mortal Kombat Franchise after Warner Bros. acquired the company in 2009 from Midway Games. And before that, it would be the first time since 1996’s Mortal Kombat: Defenders of the Realm. Co-Creator, Ed Boon served as a creative consultant, Scorpion’s Revenge served as a good jump on point for new fans of the Video Game Series, it added in X-Ray Moves and the subtle nods to Fatalities, and of course, a lot of gore and violence!

As mentioned earlier, Warner Bros. Animation is involved in producing the animation with the help of Studio Mir. Most of the scenes provide great detail in their animation which includes choreography in making the kombat intriguing. Both studios made sure it would stay true to the source material, which also includes the detail in the Character Designs. It brightened my day to see other kombatants from previous games past were included in this film. 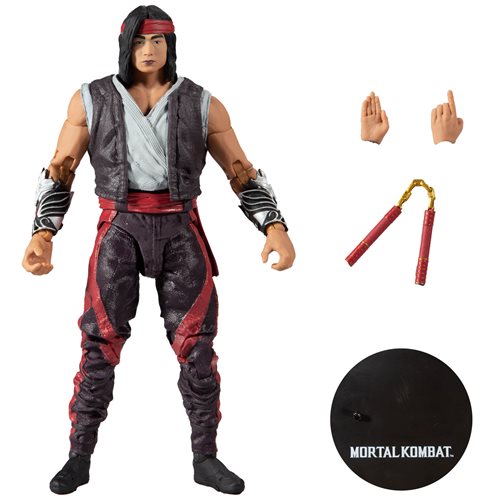 An Offer from Entertainment Earth: Mortal Kombat Series 5 Liu Kang Action Figure, coming this month! Shaolin monk and Champion of Earthrealm. Liu Kang was an orphan adopted and trained in the arts of kombat by the Shaolin order. He honored them by defeating Shang Tsung in Mortal Kombat and saving the Earthrealm as “the Chosen One,” a title that weighs heavy in his shoulders.

The movie is a solid martial arts movie and is perfect for a rental at best, it had a great script (written by the same writer currently on the DC Comic Series, The Flash,) by screenwriter, Jeremy Adams and was directed by Ethan Spaulding. Several voice actors returned to reprise certain roles for this movie, such as Kevin Michael Richardson returning to the role of Goro, Richardson voiced the Shokan in the first Mortal Kombat film in 1995. Another actor who returned was Patrick Seitz, returning as Hanzo/Scorpion, he also voiced Scorpion in the previous Mortal Kombat titles. Steve Blum also reprised his role as Sub-Zero, he voiced as the Ice-powered ninja in the current Mortal Kombat titles. It is available on Blu-ray, DVD, and HBO Max.