To be honest, I would have had a better title for this round-up but damn it, Lupin stole my headline for this article! Oh well, here’s what to expect for today’s news round-up: GKids releases a new teaser for the Dub of the newest Lupin the Third film, Attack on Titan’s Final Season will be coming to both Crunchyroll and Funimation, Baki and Yujiro come face to face in a new Netflix Original Anime, Taiso Samurai lands a new Trailer and Visual.

Lupin III: The First will be sliding into North American Theaters

While there isn’t a release date set in stone, a Dub and Sub Version of Lupin III: The First will be coming to North American Theaters soon, Takashi Yamazaki, director of films such as Stand by me Doraemon, Dragon Quest: Your Story directs this cunning new Lupin Tale, about Arséne Lupin III and his gang uncovering the secrets of the Bresson Diary while attempting to keep it out of the hands of Mysterious Organization.

Attack On Titan Storms it’s way onto Funimation and Crunchyroll

UPDATE: In a new announcement from NHK, the release date for this series will be December 7th. For more information, Anime News Network has the details.

“Many years ago, the last remnants of humanity were forced to retreat behind the towering walls of a fortified city to escape the massive, man-eating Titans that roamed the land outside their fortress. Only the heroic members of the Scouting Legion dared to stray beyond the safety of the walls – but even those brave warriors seldom returned alive. Those within the city clung to the illusion of a peaceful existence until the day that dream was shattered, and their slim chance at survival was reduced to one horrifying choice: kill – or be devoured!“

Baki: Son of Ogre to be next Netflix Original Anime

Father vs Son, it has been confirmed that the newest Netflix anime that is coming will be Baki: Son of Ogre, the series will serve as a sequel to the recent Baki Series. The story follows Baki Hanma, who has faced the toughest fighters in the world, training to become strong enough to fight his father, Yujiro Hanma, known to the world as “The Ogre“; but now he has been recognized as a worthy opponent by his father.

Alright, time to Chalk up your hands and prepare for the newest anime coming from MAPPA Studios, the original anime will be making its way to television on October 10th. For more information on this new series, head over to Crunchyroll.

“Set in 2002, the story follows the 29-year-old former member of the Japanese men’s gymnastics team, Shotaro Aragaki, who can’t quite compete like he used to. While he continues to train, his coach, Noriyuki Amakusa, urges him to retire. However, his devotion to the sport of gymnastics, his continued training, and support from his daughter Rei push him in another direction.“ 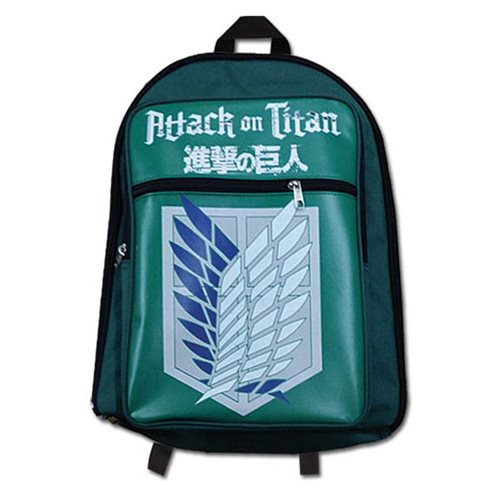 Fans of the hit anime series Attack on Titan will love this backpack. This backpack is perfect for carrying around your books and supplies. The Attack on Titan Scout Squad Backpack makes a great gift for the anime fan in your life!