Place your bets! It’s the Blue Bomber vs the Fastest Thing Alive! Today’s review finds us in Archie Comics’ first Video-Game Series Crossover, Sonic the Hedgehog/ Mega Man: Worlds Collide Volume One. It’s one of the biggest crossovers of all time and everything is at stake as Doctor Wiley and Doctor Robotnik (Eggman, whichever you prefer, but he’ll always be Robotnik to me!) Have teamed up and decided to pin their greatest adversaries against each other, the Doctors are loving every minute of it! Can the two heroes put their differences aside and stop the evil duo’s plans? Or will their new enemies defeat them? It is the first time we’re seeing the two heroes meet! The first volume collects the first four issues of the twelve-part Mega Man and Sonic crossover. Grab your Controllers and Press start, we’re beginning this review now!

At the time when this series was announced seven years ago, fans were skeptical of a crossover of this magnitude, not because of the creative team that was put up into it, this was a matter of three corporations (Archie Comics, SEGA, and CAPCOM,) working together on making this series worth reading and the Characters involved were written right and portrayed properly. But it was in safe hands, writer Ian Flynn and Veteran Comic Book Artist Patrick “Spaz” Spaziante (Spaz has been involved with Archie Comics’ Sonic series since April 1995 with Sonic the Hedgehog #25.) Flynn has been the Chief Writer for Sonic since Issue #160, but with his popularity and knowledge of video game characters, Superheroes he was also working on the spin-off Series ‘Sonic Universe’, New Crusaders, and Mega Man. Starting off the crossover with a fight between Sonic and Mega Man was a good way to entice the reader, while it was a classic misunderstanding it gave young readers a chance to see how similar Sonic and Mega Man were, Ian’s pacing and explanation of alternate realities and crossovers for new fans/readers is spot on.

Let’s move forward with discussing the artwork and character designs of the Roboticized Masters, on the left side of this paragraph, in the first volume we’re introduced to the roboticized variants of Sonic’s Allies; I admit the designs are a bit simplistic but they have a retro feel to them and that isn’t a bad thing considering it is bringing the best of both worlds considering the evil bro-mance going on but let’s face facts, the two doctors will betray each other no matter what. The artwork is handled by not only Spaz but also involves artists Jamal Peppers, Ryan Jampole, Inker Jim Amash, Colorist/Artist Matthew Herms, and Letterer John Workman; each page and approaching the panels, the artwork was detailed and the linework was smooth when you consider the intense action sequences and battles like Worlds Collide has, including the ever-changing environment whether it taking place in Sonic’s world or Mega Man, this was a great artistic team and it includes the bright, vibrant colors that Herms brought to the Crossover. That wraps things up for this review, stay tuned for the Second Volume Review coming soon! Really hope Pharoh Man doesn’t get me for using that wordplay! 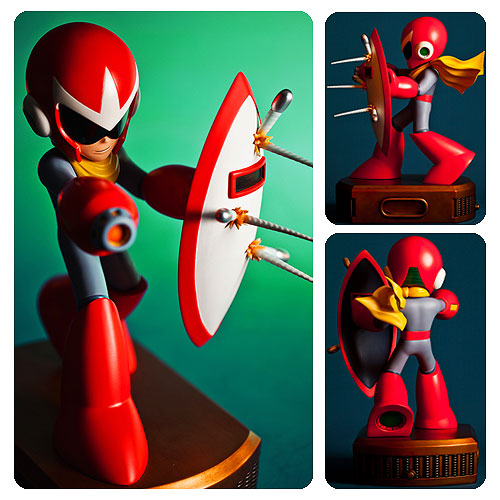 Proto Man is a prototype robot designed and made by Dr. Light, and was also the first robot master ever created. As he was only a prototype design, he ended up developing a life-threatening problem in his energy core, but refused his creator’s help, fearing that it would cost him his individuality. After fleeing and wandering the world, he was found almost dead by the evil Dr. Wily, who not only saved his life but also equipped Proto Man with the Proto shield: a special armament that can deflect most projectiles. Having initially sworn loyalty to the evil scientist, Proto Man later sided with and now fights alongside Mega man in the battle against evil. The Mega Man Proto Man 13-Inch Statue is cast in high-quality polystone. A variety of painting and finishing techniques were used to achieve a remarkable appearance on the statue. The Mega Man Proto Man 13-Inch Statue is a limited edition of 1,000 pieces. The statue is hand-numbered and includes a certificate of authenticity. The statue measures about 13-inches tall.