Our newest review finds us in the first volume of Frank Miller and Klaus Janson’s Daredevil. The Man Without Fear’s new lease on life (and one of the most talked-about runs in Comic Book History), in this trade paperback it collects stories such as Peter Parker, the Spectacular Spider-Man issues 27-28, Daredevil Issues 158-161 and Issues 163-172. Issue 162 was not included due to a different creative team and a separate story, it was written by Writer Michael Fleisher and Drawn by Steve Ditko. Back to the topic on hand, this collected volume features characters such as Ben Urich, Black Widow, the Gladiator, the nefarious Crime-Boss, the Kingpin and also introducing new Characters such as Daredevil’s mysterious mentor Stick, Matt’s long-lost love Elektra (the Assassin who would become one of Marvel’s memorable characters, Frank Miller has had some comments regarding Elektra back in 2015 when it came to her introduction in the second season of the Marvel-Netflix series, Daredevil.) It mixed in martial arts, a doomed romance, traditional super-heroics.

The First half of this story showcases Frank Miller and Klaus Jansen’s artwork, keep in mind that it may be about Miller and Klaus’s run but this also includes work from Roger McKenzie and David Michelinie (who is well known for being a co-creator of characters such as Venom, Carnage, Scott Lang/Ant-Man. Also for his run on the Iron-Man Series in the late 70s, early 80s), the duo of Roger and Frank Miller first worked together for DC’s Weird War Tales in 1978; McKenzie and Miller’s time on Daredevil had a dark, horror tone that fit perfectly in that era of Comic Books. Back on the subject of the artwork, Frank’s linework is solid, his action sequences and detail in emotions, also including the scenery (the city, etc), Klaus’s ink in this series was steps ahead of its time and this includes Frank’s artwork as well, with this taking place before his iconic Batman story, The Dark Knight Returns. Keep in mind, this reviewer wasn’t a Daredevil reader at first, recommended by a Comic Shop owner and I’m glad he recommended it.

Keep in mind that at the time, Daredevil wasn’t getting the attention he is now before Miller and Janson came in from what I’ve heard fans say about the hero but thanks to the incredible creative team on this book, the character-driven stories, and not to mention it brings a city that can be filled with both Splendor and depravity such as New York to life. When it came to villains, Bullseye and Kingpin were one of my favorite parts in reading this collected series, Bullseye was sadistic and the opposite of what Daredevil stood for, as for Kingpin, Miller did a good job showing how threatening he could be when given the opportunity. 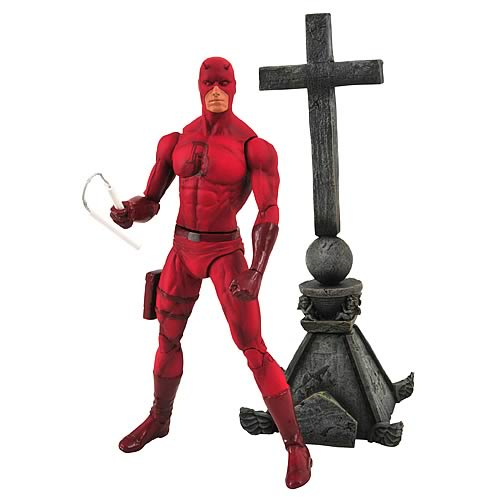 Justice is blind, after all! The Man Without Fear is back to clean up Hell’s Kitchen, thanks to this unstoppable Daredevil Action Figure. Each Marvel Select figure stands over 7-inches tall and features multiple points of articulation, plus one-third of a deluxe three-part urban display base. Sculpted by Sam Greenwell, this classic Daredevil is perfect for any superheroic collection or the casual Fan With No Fear! Order yours today… if you dare!