Valve confirms no exclusive video games for Steam Deck. According to a new report from @usatoday more information is available on our website, the link is in our bio.
News from Castle Grayslull:
Warner Bros. Japan surprises fans with Jojo's Bizarre Adventure Part Six's Opening and Enrico Pucci's Voice Actor announcement. More information can be found at our website, link available on our bio🔗
Anime Japan is set to make its triumphant return to Tokyo's Big Sight in March 2022. More information can be found at our website, the link is in our bio. 🔗
Time to venture into the unknown, the Newest Review for Star Trek Discovery Season One is now available to read on Red's Nerd Den! Be sure to check it out now, the link is on our bio!
Aniplex of America releases a new English Dubbed Trailer ahead of the International Release for Sword Art Online the Movie -Progressive- Aria of a Starless Night. Click on the link in our bio for more info!
Looking for the perfect treat for Ghostbusters fans old and new? Look no further, because our newest review is finally here! And Spoiler-Free! Check out our website for the review.
The Newest Manga Review Finds us a Hidden Gem, One of the Newest Gag/Comedy Manga that has caught fans attention, Shuhei Miyazaki’s Me & Roboco Volume One. You can read our review on our website, the link is in the bio.

Yesterday afternoon fans were blown away by Sony’s latest reveal at the rescheduled Playstation 5 Game Conference, from the latest Ratchet and Clank game, up to Miles Morales getting his time to headline a Video Game. Here are Highlights of yesterday’s conference:

The Duo are back for another adventure, this time they are traveling different dimensions! The 3D Platformer is heading to a familiar, yet mysterious place and that’s Playstation’s newest console, Playstation 5. In this latest trailer, we not only see new elements of gameplay (including Ratchet riding on a Dragon!) But Clank meeting a girl look-alike that replaced Ratchet? Oh my!

Capcom has been on a successful streak with its Resident Evil Remakes and now it’s moving onto a Sequel involving Chris Redfield, Ethan, and Mia; it has been a few years since the dreadful Baker Plantation Incident and the couple finds themselves having a chance to move on from the horrifying events, or so they thought… When Chris Redfield makes a surprise appearance and turns their world upside down as Redfield’s actions have set off a chain of events that has a distraught Ethan trying to find the answers as he finds himself in a strange village. Below are the trailer and a special message from the developers.

Showing off the Pre-Alpha Footage for its announcement trailer, NBA 2K21 is coming your way this fall! It is incredible footage of Zion Williamson playing and sweating (Dang! The Detail!) As it makes its way to retail and Game Stores in Fall 2020.

Receiving one of the biggest ovations of the night, Insomniac Games has confirmed that this will be a stand-alone game, while most speculated that this was a remastered version of the first Spider-Man Game or a Game of the Year Variation, even an Expansion but thanks to our pals for making the confirmation. No new info is available on this title but it will be available Holiday 2020.

We finally get a chance to look at Sony’s latest console, the Playstation Five, while it has spawned countless memes it also gave us a look at the specs if you recall that it was also announced back in March. For more on the Playstation 5’s latest hardware announcement, the Verge has what you’re looking for! 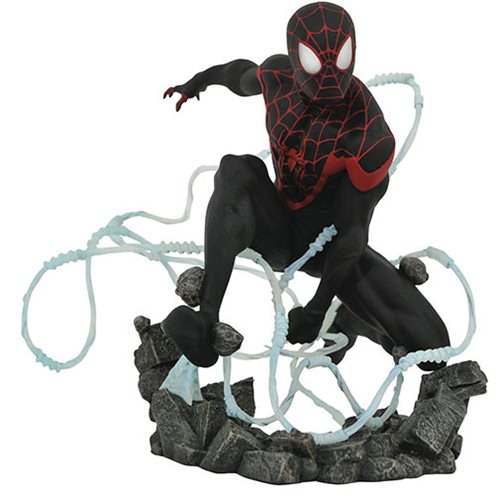 Time to go into the Spider-Verse! Other-dimensional spider-hero Miles Morales spins a web in this Premier Collection statue. Limited to only 3,000 pieces, this approximately 9-inch tall resin statue features detailed sculpting and paint applications and comes packaged in a full-color box with a certificate of authenticity.