Today is New Comic Book Day, this week we’re seeing another appearance of Punchline in Year of the Villain: Hell Arisen #3, then Storm is in danger, and it’s up to Jean Grey and Emma Frost to save their teammate in Giant X-Men: Jean Grey & Emma Frost #1, and Vampires flood the streets in Killadephia #4. As usual, the Previews, Covers, and Descriptions are provided by Previews World.

“Following her triumphant reintroduction in the pages of Young Justice, the new Amethyst miniseries follows teenager Amy Winston-a.k.a. Princess Amethyst-as she returns to her magical kingdom to celebrate her 16th birthday in style. The only problem? Her kingdom is missing, her subjects have vanished, and none in the realm of Gemworld-even her best friend, Lady Turquoise-remain loyal to her house! Alone and dejected, Amy’s forced to find new allies and confront dark secrets on an all-new quest to the farthest reaches of Gemworld.”

“SINS OF THE FATHER,” Part Four-As vampires flood the city, no one in Philly is safe. The streets become a bloodbath as the population desperately tries to survive until morning. But will dissension in John Adams’ undead army open a crack that Jimmy and Jose can exploit to defeat them…or will Jimmy’s insecurities have him chasing ghosts?

THE FINAL BATTLE FOR THE MAROONS!

While the King of Wakanda fights against his own in the plane of Wakandan memory, N’Jadaka’s invasion continues – and without the Black Panther, the rebel Maroons are outgunned. Not one, but two Wakandas will fall if they fail. The galaxy hangs on a thread!

“With the so-called Peace Division firing upon the protesters it’s meant to protect, new Green Lantern Jo Mullein devises a novel solution to bring the chaos to a close-one that causes the rookie Lantern to run afoul of the City Enduring’s leadership council. Meanwhile, we learn more about Jo’s recruitment into the Green Lantern Corps, and the nature of her mysterious and unique power ring.“

“Trying to acclimate to life as a mutant, the newest Turtle Jennika embarks on a solo adventure that will force her to come to terms with both her troubled past and conflicted present. Not to mention a brand new villain! Brahm Revel (Guerrillas) returns to reveal more of Jennika’s backstory from his acclaimed TMNT Universe tale “What is Ninja?”!“

Manga Picks of the Week

“The greatest warriors from across all of the universes are gathered at the Tournament of Power. Kale, a Saiyan from Universe 6, is on a rampage that’s leading to the erasure of one universe after another. Goku and the other five remaining fighters from Universe 7 are determined to survive the battle and save everything and everyone they know!”

“The battle against the powerful sibling demons Gyutaro and Daki is not going well. Although finally able to fight alongside Tanjiro against the monsters, Zenitsu, Inosuke and even the Hashira Tengen Uzui may all be overwhelmed. Battling even one of Lord Muzan’s Twelve Kizuki is hard enough-can Tanjiro face two of them alone?”

Samurai 8: The Tale of Hachimaru Volume 1

“Becoming a samurai seems like an impossible dream for Hachimaru, a boy who can’t even survive without the help of his father. But when a samurai cat appears before him, his whole life changes! A legendary manga creator and a rising star come together to bring you this science fiction samurai epic!” 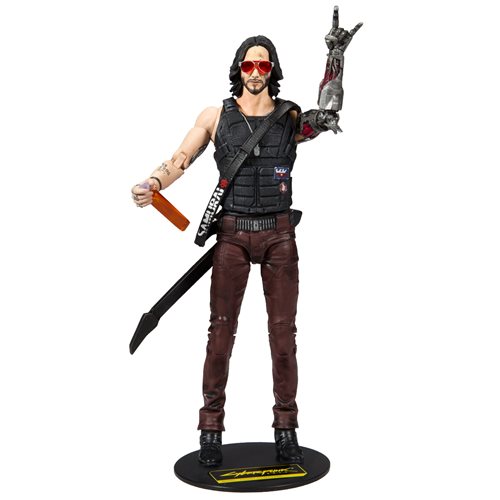 Hot off the truck at Entertainment Earth: This figure features Keanu Reeves as Johnny Silverhand in his iconic outfit from the Cyberpunk 2077 video game. Johnny Silverhand is designed with ultra articulation with 22 moving parts. The 7-Inch scale figure comes with a base, Johnny’s guitar with strap and a bottle, and includes a bonus ‘Rock-On’ hand. The figure comes packaged in Cyberpunk 2077-themed window box packaging. Cyberpunk 2077 is an open-world, action-adventure story set in Night City, a megalopolis obsessed with power, glamour and body modification. You play as V, a mercenary outlaw going after a one-of-a-kind implant that is the key to immortality. You can customize your character’s cyberwar, skillset, and playstyle, and explore a vast city where the choices you make shape the story and the world around you.