Catching back up from The First Cour of Mappa’s Anime Adaption of Gege Akutami’s Jujutsu Kaisen, we’ve got a chance to look at such stories like Cursed Womb, Cursed Training, and now School is in session as we get into the Kyoto Goodwill Event and Death Painting Arcs.

This second cour brought out everything to the table, from well-choreographed fighting sequences, great humor, dialogue, and of course, great character designs and animation. Immediately after the battles with Kento Nanami and Yuji Itadori, we find that Mahito has retreated to the hot spring to heal and speak with Allied Curses, a new rivalry with Sukuna’s Vessel.

Much to the horrified expressions on Megumi, Nobara’s faces, and how enraged the Kyoto Tech’s Principal Yoshinobu Gakuganji was to learn that Yuji was very much alive and back in competition, the teams converged and planned out their strategies. Tokyo’s team was trying to figure out how to integrate Yuji into their plans, while the Kyoto Team (including Gakuganji) wants to kill Yuji except for Aoi.

The team battles are always fun to watch, it reminded me of the Chunin Exams when Naruto first hit the scene, the introduction of new characters, different ways of fighting, etc. In Jujutsu Kaisen’s case with the Kyoto Goodwill Event Competition, the Tokyo Team was split from Yuji due to being blindsided by Aoi and Team Kyoto.

With the Spirit Bash Race in full swing, you have these other battles that unfold such as Panda vs. Ultimate Mechamaru, Nobara Kugisaki vs. Momo Nishimiya, Maki Zenin vs. Mai Zenin (Sister vs. Sister) that bring depth to these characters and serves to show how much our protagonists have grown so far as Jujutsu Sorcerers. While we had sisters fighting each other certain family clans were fighting, that’s right, I am referring to First-Year Student Megumi Fushiguro vs. The Third-Year Student Noritoshi Kamo, what an incredible battle it was with Megumi’s Ten Shadow Manipulation Technique up against Noritoshi’s Blood Manipulation Technique but unfortunately we didn’t get to watch it finish with enemies invading the Bash! Just outside the area, the curse user, Juzo, casts a curtain over the Tokyo campus. The curtain allows anyone to pass through at the cost of blocking out Satoru Gojo. Gakuganji and Utahime Iori head inside to rescue the students from danger.

With the enemies invading the Event, things begin to look even more interesting when Hanami fights the combined force of Megumi, Toge, and Noritoshi. This is where the quality of animation begins to step up, Mappa has a great team of animators and artists, bringing in a combination of traditional with a hint of CGI, a good example of this was Aoi and Yuji fighting Hanami together, the animation wasn’t clunky or seemed off, this was a great moment that had fans on the edge of their seat. It was Yuji’s Black Flash, Aoi’s Cursed Tool “Playful Cloud” against the Special Grade Curse Spirit Hanami, while on the other end of the map was Yoshinobu Gakuganji vs. Juzo Kumiya, Juzo is a sadistic Curse User and battled with a Non-Cursed Item, an Axe but while being Sadistic, he was also a villain who you probably be a one-time character. Gakuganji’s cursed technique amplifies his melodies and launches them like blades of cursed energy. Juzo believes he’ll easily be able to make a wallet out of the old man by closing the distance.

The introduction of Aoi’s Cursed Technique “Boogie Woogie” was clever and useful, it allows him to switch places with anyone by clapping. Finally, a man who was considered to be a muscular meathead but was a man who can be a bit of a pervert but also is Intelligent (an IQ of 530,000). There is a pattern in this first season, call me crazy but whenever enemies begin to use Domain Expansion it’s stopped immediately, or the calvary arrives immediately, happened during the fight with Mahito and now it’s happening again with Hanami and Juzo, Gojo appeared over the battlefield, unleashing one of his fiercest techniques, Hollow Technique: Purple. This technique ravaged the field and left Juzo critically injured but still alive enough to answer questions, with Mahito escaping the battle with six Sukuna fingers as well as Death Painting Wombs No. 1-3. In the aftermath of the attack, the teachers consider canceling the Event but Aoi comes up with an idea that is crazy, by playing Baseball to be the final event.

The final part of the review finds us with the Death Painting Arc, Yuji, Nobara, and Megumi are put on a mission to investigate the mysterious deaths. Each of them died by their doorways under similar circumstances, where the entrances to their homes were left open with a curse waiting there to kill them. The victims were found beneath Yasohachi Bridge, this also leads to a huge fight with the finger bearers. This arc does serve as one for not only character development but also to show how much they have grown but also served a purpose for Megumi, it was one of the most intense battles he had to endure but he finally pushed his limits and showed his true strength. Yuji Itadori & Nobara Kugisaki vs. Eso & Kechizu was a battle of realization, what I mean by this was it they had to come to terms with killing the two brothers. 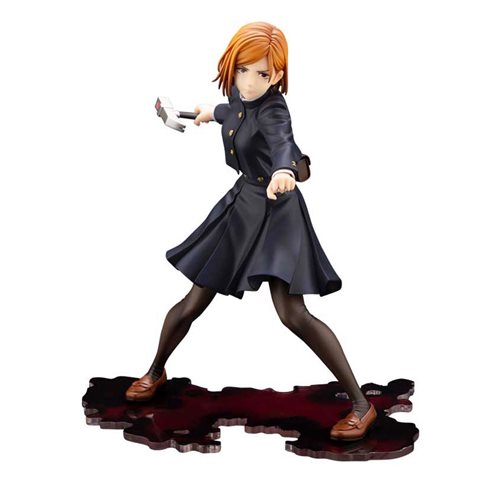 From the TV anime, Jujutsu Kaisen, here comes the Jujutsu Kaisen Nobara Kugisaki ArtFX J 1:8 Scale Statue! Based on an original illustration drawn specifically for this figure, Nobara comes to life as she is preparing to use her “Straw Doll Technique”. The dynamic feel in the way of her skirt and hair makes it feel like she is about to move at any moment. The small details such as her cursed tools are also recreated in the finest detail. The design of the base uses the character’s signature colors to recreate the dark yet stylish feel of the anime. Made of PVC/ABS, this figure measures roughly 7 1/2-inches tall.
Advertisements