First reported by Newsarama’s Chris Arrant, Heavy Metal is setting up a brand new Space Exploration Drama with a Star-Trek vibe set to make its debut in Heavy Metal’s 303rd issue with Writer Ryan K. Lindsay and Artist Sebastian Piriz. The Publisher had this to say about the new series:

“A tale of intergalactic iniquity and universally unsettling truths. Black Beacon is about Earth receiving a message to travel across the universe to a location where a new level of connection and understanding can be forged. But when a team arrives, they find they are too late to the party and it’s all sideways, Niko is the historian of the group who lands on the Dyson Sphere and tries to piece together some kind of understanding of what’s happened, who is there, and why they should leave as soon as they can. Along the way, she’s going to meet some very interesting lifeforms, get into some deadly situations, and learn some truths that are absolutely intergalactic.“

For more on this story, head over to Newsarama for all of the details, but for now, here are the preview images for the new story, as always, the information, quotes, and images were provided by Newsarama and Heavy Metal. 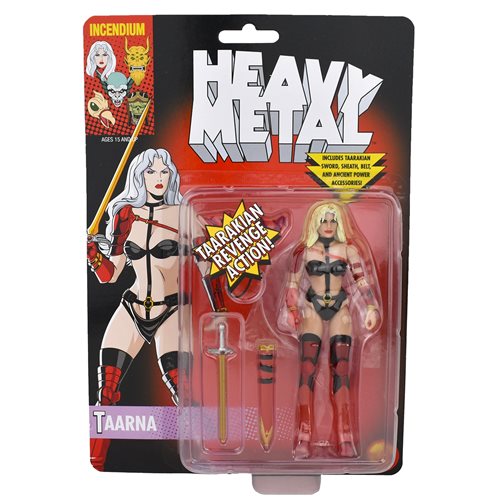 Taarna the Taarakian returns! Her immortal spirit passed down to champions throughout space and time, each incarnation of Taarna becomes a fearless avatar of vengeance. Inspired by the ultimate era of Saturday morning cartoons, the Heavy Metal Movie Taarna 5-Inch FizBiz Action Figure – Blond Variant has roughly 10-points of articulation, and comes with her sword.
Advertisements