Skip to content
Representation in the Media: Why it matters.
Opinion

Representation in the Media: Why it matters.

Today’s topic is about the importance of representation, why it matters in today’s media.

Today’s topic is something that is widely discussed and on the minds of people and creators everywhere, and that is Representation. For young viewers and readers today, the portrayals of minorities in media not only affect how others see them but also affects how they view themselves. Take, for example, the success of films such as Rich Crazy Asians, Black Panther, and Parasite (which won the Academy Award for Best Picture, Best Director, Best Original Screen Play, and Best International Film. It made history for being the first Non-English film to win the Best Picture Award.) These films send the message to Hollywood that they need to realize is that representation of minorities is important and it is beginning to spread to pop culture.

Vox’s Abbey White spoke to six Hollywood consultants that specialize in diversity in 2017, they had said that people are looking for representation that is authentic, fair, and have humanity; since that article was written, and there have been a fair amount of critics that they claim that representation today is “Forced” or too “Politically Correct“. While people are entitled to their opinions, most of the opinions of these critics are either one-sided arguments or they choose to not believe that the world is changing and so are the taste of readers and viewers, in August 2019, I spoke to artist and the founder of Hero Nation, Jermaine Dickerson about the importance of representation not only in the community but also in Hollywood, also if the media giant would learn from past mistakes:

The Importance of Representation in the Community.

“I believe representation saves lives, so it’s absolutely vital in a variety of sociopolitical, racial and gendered spaces. In Ypsilanti, specifically, there are different organizations tackling specific issues, and I’m thankful Hero Nation can be a part of this collective movement.“

The Importance of Representation in Hollywood.

“I think Hollywood is an inherently capitalist industry that has historically perpetuated harmful narratives that have hurt disenfranchised communities. However, while I think it’s important to celebrate films like Black Panther and Into the Spider-verse, I think it’s more pressing that we continue to build our own structures and create our own narratives. Of course, we should have a bit of fun along the way; in fact, it’s imperative that we do.“

In 2019, GLAAD published a report called “Where We Are on TV” that analyzed the overall diversity of primetime scripted series regulars on broadcast networks, the results were astounding; it reported in a record-high of 10.3% which bested last year’s record-high of 8.8%. In Animation, we’re seeing an incredible change, shows such as Steven Universe, Adventure Time (Speaking of this series, there will be an episode of Distant Lands that will be exploring the relationship of Princess Bubblegum and Marceline the Vampire Queen while they are on a Mission to the Glass Kingdom called “Obsidian”), Duck Tales, Star Vs. The Forces of Evil, She-Ra and the Princesses of Power, and most recently, The Owl House.

With what is going on in the world today, the ongoing battle against Systemic Racism, Inequality, and the recent battle involving Misinformation and Disinformation with topics like the recent health epidemic COVID-19, Politics, and in society today. It is imperative that we continue to teach the importance of representation to Children and put aside our differences for the greater good. With the help of Artists, creators, and writers, it is up to us to help keep the vision and dream alive. 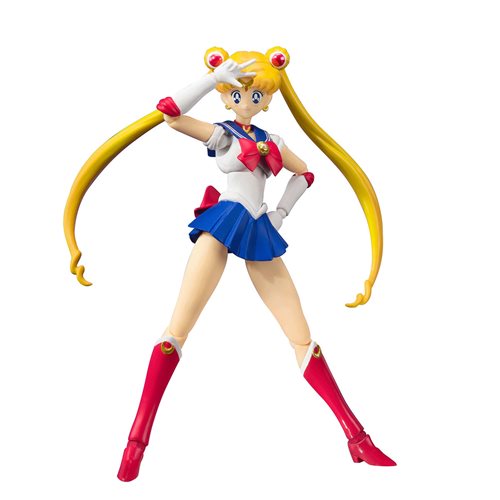 From Bandai Tamashii Nations comes the Pretty Guardian Sailor Moon Sailor Moon Animation Color Edition SH Figuarts Action Figure! Featuring coloration based on their appearances of the 1990s anime series, it showcases the Sailors and their cute actions with all the accuracy to detail and posability fans have come to expect from SH Figuarts. The figure includes 3x optional expression parts, 3x left and 4x right hands, Moon Stick, Luna, and stand. Measures about 5 1/2-inches tall.