It’s been a while since I’ve written a Comic Review, this time our review finds us in the latest issue of Wonder Woman. This is a new beginning for the Amazonian Princess, which includes a new Writer and Artist, Mariko Tamaki and Mikel Janin. In this issue, we find our heroine trying to move on after a grueling battle with the Four Horse Women of the Apocalypse, a run-in with the Phantom Stranger, now she is moving into a new apartment and meeting a familiar foe, Maxwell Lord. What is he up to? Can Wonder Woman stop his mysterious plan? Let’s begin the review!

With this beginning, a new story with a Creative Team change (was supposed to debut sooner but then the recent Diamond Distribution Disagreement, and then COVID-19,) but nevertheless it’s like you heard from your family “Good comes to those who wait.” Mariko Tamaki does a great job with getting Wonder Woman’s sense of Justice right, Tamaki is fairly still new to the Superhero Comics but it is clear to see why she was recently nominated for an Eisner Award; but with if you are using something that represents Justice then you would pick something that is it’s opposite, Maxwell Lord because of his sense of “Fighting for the Greater Good” (But will mainly be remembered for his Evil Ways. As always, there is plenty of action, beautiful artwork, and spreads from the artistic team of Mikel Janin, Jordie Bellaire (Colorist), and Pat Brosseau (Inker).

It was a great issue, solid action, a great Car Chase with mind control involved, and Diana going to IKEA. Yeah, I know that last part isn’t THAT exciting but still worth it in the long run for this reviewer. 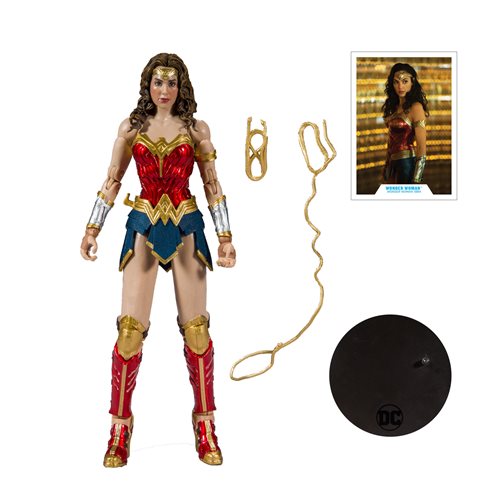 The Wonder Woman 1984 action figure is based on the movie and includes an unfurled lasso, wrapped lasso, and base. Also included is a collectible art card with Wonder Woman 1984 artwork on the front and character biography on the back. From Amazon princess to the world’s greatest warrior, Wonder Woman is at the height of her power but living a quiet life as Smithsonian curator Diana Prince. Her compassion for mankind is strong despite man’s flaws. But now she must again draw on her incredible strength, courage and wisdom to battle her greatest foe, The Cheetah!