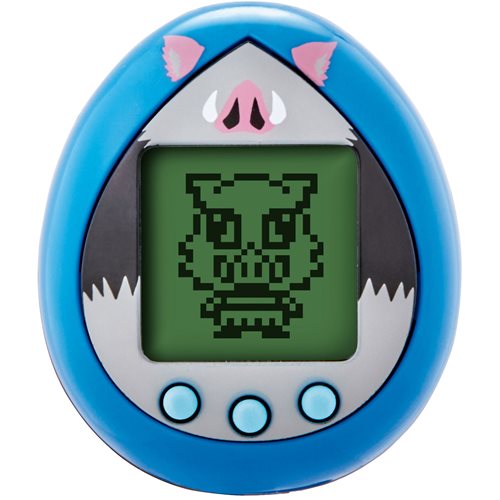 Raise your Demon Slayer and based on how you train them, you can get Tanjiro, Zenitsu, Inosuke or one of the 9 Hashira. If your Slayer is hungry, give them a rice ball. If they’re in a bad mood, give them green tea. There are three games to train your slayer – Cut the Big Rock, Break the Hyoutan and Pour Hot Medicine. If you neglect training your Slayer, your Slayer will become injured. You need to make sure you treat the injury before Kakushi comes to clean the dead slayer. Plus, there are many fine details that fans would love such as Kasugai Crow, Chuntaro and demons who battled out! The Demon Slayer Inosuke Inosuketchi Tamagotchi Digital Pet comes with 1x blue print Demon Slayer Tamagotchi which matches Inosuke’s kimono on a chain to take with you everywhere!

Yesterday, fans and gamers were in for a treat, Tsunekazu Ishihara, President, and CEO of the Pokemon Company spoke to fans in a Streamed Presentation to discuss three new games, the first one is called ‘Pokemon Smile‘:

A new app that kids can download on their smartphones that will help kids learn healthy habits, Pokemon Smile is an app that will let kids play while they brush their teeth and help them with establishing good tooth brushing habits, kids can save pokemon from Germs and catch pokemon as well. The App is available to download on iTunes or Play Store now.

Think of Starbucks, but more friendly and adorable; ‘Pokemon Cafe Mix‘ is another new game that is a unique puzzle game where players can serve Pokemon who come to their cafe, you can link pokemon icons by swirling them around and can change at random. You can also prepare Café Offerings and they can join your staff as well! The Pokemon who join your staff can use their skills to help you with certain puzzles. You can build on your café and attract more Pokemon to come to visit. Another game you can get on iTunes and the Play Store, also on the Nintendo Switch. This title is available for preload on the E-Shop and preorder at the iTunes and Play Store*Please note that it may be available for free but it does include the option for in-app or in-game purchases.*

Someone at the Pokemon Company must have been peeking at Pokemon Fans Christmas lists because it has been confirmed that Pokemon Snap is finally getting that sequel! Twenty-Years in the making, ‘New Pokemon Snap‘ takes place on an island inhabited by Pokemon, players take pictures of the Pokemon to help with research, a great way to observe them in their natural habitats and interact with them. The Original Pokemon Snap was released on the Nintendo 64 in 1999.

Pokemon Go’s biggest announcements were Niantic’s to make the game playable while stationary, also that the annual Pokemon GO Fest will be going digital this year and available for all players. Also, Unova’s Mythical Pokemon Victini is teased to be part of the event. Also, Mega Evolution was announced which will be interesting to see how this dynamic moment will unfold in this game; last portion of the announcement was that Galarian Farfetch’d is now available along with new items and Clothing based on the new Sword and Shield DLC ‘Isle of Armor‘ is available now.

Finally, the last portion of the Pokemon Presents stream was the announcement of the appearance of Generation VII’s Mythical Pokemon Zeraora, with the first DLC available for download as of yesterday players can take part in a special Max Raid Battles that would include the mythical polemon Zeraora. If a million players participate or battle in the raid, a special Shiny version of Zeraora will be available for players via Pokemon Home, below is an image explaining what to do for the chance.

Build even bigger battles with this Tyranitar construction set. This Rock- and Dark-type Pokémon stands over 6 inches tall and creates heroic stances when you pose it in different battle-ready positions. The faithfully modeled Tyranitar includes Rock- and Dark-type attack details for an authentic building experience.