Nintendo recently unveiled its Final Major Update for Super Mario Maker 2, in this new update Mario fans and Gamers got their wish, and by that I mean they finally get to create their own Mario Worlds! Wait, Worlds? That’s right, in this article we’re gonna breakdown the recent reveal in this Final Major Update that was released on April 22nd:

Finally making its appearance to the Mario Maker Franchise is the SMB2 Mushroom, Please note that this will only be compatible with the Super Mario Bros. Nes Game style. While he is looking and behaving like he did in Super Mario Bros. 2 (Or whichever character you play as,) one of the most useful features of this power-up is pulling up the Chomps and using them to take out your enemies! Another item makes its appearance too, which we’ll cover later.

Another long-awaited power-up has made its appearance, SMB3’s Frog Suit allows you to run on water (while carrying stuff of course,) swim with ease, again, it’s only available for the Mario Bros. 3 Game style.

Joining in with the Super-Bell Power-Up is the Boomerang Flower from the Super Mario 3D Land (and 3D World) Game, giving you the ability to become a Koopa Troopa Look-Alike and wield the Mighty Boomerang. Available only in the Super Mario 3D World Game Style. 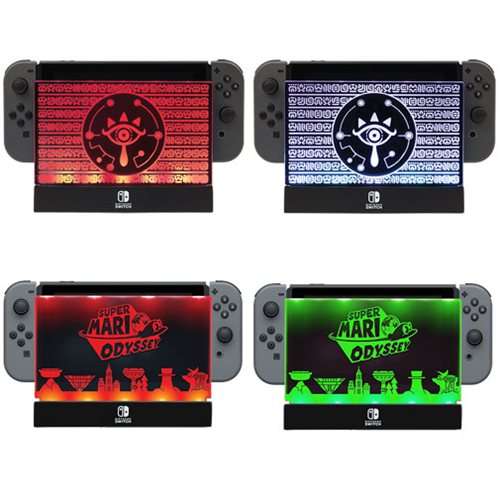 On Sale for a Great Deal at Entertainment Earth: Decorate and protect your Switch dock with a custom LED light show! Choose from 2 different designs and over 20 different color settings to transform your dock into a terrific glowing display. The Nintendo Switch Light-Up Dock Shield features an electronic base that holds the dock and connects to the dock via USB, 2 acrylic framing panels, and 3 pieces of printed light-guide film with Nintendo artwork. You’re gonna have fun with this!