Today’s review we’ll be over the Mini-Series called Ragnarök: The Breaking of Helheim by Legendary Artist, Writer Walt Simonson, Walt is known for his incredible run on the Marvel Series Thor (as well as his Creator-Owned Series called Star-Slammers), which his run lasted for Four Years; during his run, he introduced Beta Ray Bill. What is this story about? Ragnarök is the Twilight of the Gods in Norse Mythology, the Destruction of the Nine Worlds. Three hundred years have passed as we witnessed the birth of Vengence. Although there was a long belief that evil was destroyed along with the Gods in the Final Conflagration but this belief proved to be false as only the Gods had died. With the Nine-Worlds Collapsed, Kingdoms shattered, replaced by a Twilight-World known as the Dusk Lands, Overrun with Humans, Trolls, and Demons, Thor found himself the lone survivor of the Battle but he finds himself in another battle as the Lord of the Undead, Angantyr unleashes his army of undead walkers and Draguar to destroy the Last Vestige of the former worlds. The story continues on as Thor hears a voice from the past, learning that most of the old stories are not true as he finds that his journey takes him to Helheim, the Land of the Undead. Let’s begin the review.

One of the things I would say right away is that Simonson is still one of the best writers and artists out there today, without a doubt, the first issue of this series served as the perfect jump-on point for new readers to get a good grasp on what’s going on, both in this world and its conflicts. Whether you’re familiar with Norse Mythology through storybooks or Marvel Comics, you can see the enormous impact Ragnarök had on the world, people living in despair and in fear of what will happen next. While Simonson handles the art and writing, he has Colorist Laura Martin helping him and it does not disappoint her rich colors help bring this Apocalyptic World to life. The second issue, we were introduced to Freyr who was arrogant, cocky and overall a hissworthy villain; with him fighting Thor, it was a massive takedown. Hagen was one of the characters from what I’ve heard from other fans that despised but I found his introduction with a good chuckle, not to say that to write it off as a horrible character but when it is written right (Since this is a Walt Simonson story) you can’t help but enjoy it. With each issue, it is clear to see that this isn’t the God of Thor you’re familiar with, whether it be through Marvel, or Norse Mythology (And that’s a Good Thing!) 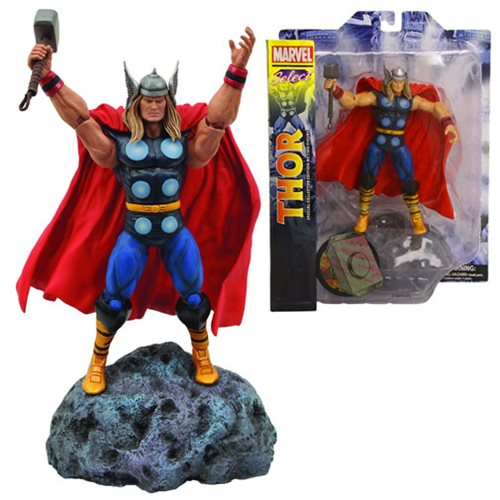 From the halls of Asgard and the pages of some of the greatest comic books ever written steps the mighty Thor! The hammer-wielding Avenger has returned to the Marvel Select line in his classic incarnation with this Marvel Select Classic Thor Action Figure, a fully articulated 7-inch tall figure with 16 points of articulation! This Thor figure includes his hammer Mjolnir as well as an asteroid display base, all in the stylish Diamond Select packaging.