Tomorrow is New Comic Book Day, we’re seeing Punchline make her debut in Batman #89, Wally West has to make the hardest decision of his life in the final issue of Flash Forward, Marvel’s acclaimed podcast comes to life in the very first issue of Marvel Voices, meanwhile, a new story begins as Bitter Root makes its triumphant return! Grab your checklist, it’s time for Red’s Picks of the week! Previews and Descriptions provided by: Previews World

“The finale of Flash Forward is here, and Wally West must make the toughest choice of his life: save the day, or save his family. With the crack in the Dark Multiversal barrier reaching critical mass, Wally’s mettle will be tested in ways the young hero has never seen before…and this surprise ending will leave you speechless!“

“NEW STORY ARC! The critically acclaimed series returns! Loved ones once thought lost forever have returned, though the bliss of this family reunion doesn’t last for long. Cullen has changed, and everyone is concerned. But they’ll need all the help they can get, as a new threat has arrived on Earth…”

•  The war in Hell’s Kitchen builds as Owl takes his stab at Wilson Fisk, formerly the Kingpin of Crime – now Mayor of New York!

•  Matt must come to terms with what Daredevil truly means.

•  And he better do it soon, as a new and deadly foe makes a decisive return…“

“The Daily Planet is under attack! When the Klan invades the newspaper’s office, they kidnap Lois Lane, Perry White, and Inspector Henderson. The Klan’s attacks have separated our heroes, forcing Roberta and Jimmy Olsen to step up and help save the Daily Planet staff.

But the Klan has one more surprise to reveal. In order to save his friends and stop the Klan once and for all, Superman must face his own identity to unleash his full potential and ultimately accept who he really is.

Inspired by the 1940s Superman radio serial “Clan of the Fiery Cross,” New York Times bestselling author Gene Luen Yang (American Born Chinese, Boxers and Saints, The Terrifics, New Super-Man) concludes his personal retelling of the adventures of the Lee family as they team up with Superman to smash the Klan.“

“Mysterious alien creatures secreted within the mountains of the British Virgin Islands capture Vampirella and transport her home to Drakulon just as Vampi’s best bud, Benny the Witch, is about to become a human sacrifice. Will Vampirella give up life on her homeworld to save yet another human? Will Benny be the guest of honor at a native barbecue?

Also this month: Dynamite Entertainment commemorates the contributions of African American creators of color with a special set of variant covers from some of the industry’s top talent!” 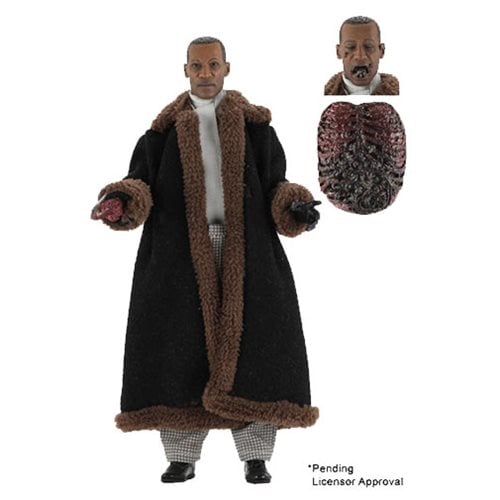 I dare you to say his name five times! From the classic horror film series Candyman! The terrifying slasher films told the story of vengeful urban legend Candyman, who could be summoned by speaking his name five times in front of a mirror. NECA’s clothed action figure features the likeness of legend Tony Todd in two forms – interchangeable heads allow regular and bee-covered expressions. The figure also has an elaborate soft goods coat and comes with an attachable “bee swarm” chest. The Candyman 8-Inch Cloth Action Figure comes packaged in clamshell packaging. Available tomorrow at Entertainment Earth!

Thanks for reading! If you have any suggestions, news tips, or questions, email me at webmaster@bigrednerd.com; Also, be sure to Follow and Subscribe to the Nerd Den’s Twitter, and Tumblr! Links are located on the Sidebar! Also, check out my relaunched Patreon Page, and Ko-Fi Page!