“Yes Son, I’m alive. But I was trying to save you from Lacroix.” ~Robert Queen

“Oliver Queen thought he had it all figured out. As the heroic archer Green Arrow, he’d finally found a sense of purpose, friends to aid him, even a place on the Justice League of America. But now he’s not even sure where he came from… or whom he came from.

As Green Arrow discovers that his stranding on a desert island was more than just an accident, there seem to be more sinister forces at work behind all these sudden revelations. The Queen family is embroiled in a war generations old. A war of clans. A war of outsiders.” One of Jeff Lemire’s best stories yet; not to mention crafting one of the best Green Arrow stories to date! But we cannot leave out Andrea Sorrentino, one of the best artists out there today.

During the New 52, Green Arrow was struggling to keep up; with Batman leading the sales with the Dynamic Duo of Writer Scott Snyder, and Artist Greg Capullo. A new team came in on Issue 17 and with it began a story beyond imagination, Involving war in the city and at Sea. Jeff Lemire coming off his run on Animal Man, one of the best DC stories since Grant Morrison’s Animal Man and Andrea Sorrentino, who was finished his work on I, Vampire.

We begin this review with something different, and that would be the dynamic artwork of this arc If you’re not familiar with Andrea Sorrentino, this was one of the Comic Series that made his popularity grow with each issue in his run on Green Arrow. Every action sequence down to the flashback scenery stood out on the page, with Lemire’s script and Sorrentino’s Art brought change that was desperately needed for the series.

The Characters in the War of the Clans story were fascinating, take for example Richard Dragon, or Ricardo Diaz Jr, is known to John Diggle since he was the one who murdered Ricardo’s Father a drug kingpin. The League of Assassins trained Ricardo and made him a living weapon; however, he murdered his Sensei and took his name. His battle with Shado, Dragon vs Dragon! Richard Dragon during his introduction reminded me of Marvel’s Inhuman Character called Karnak; The Cousin of Blackbolt who has the power to sense the weakness of his opponents, also a superb Martial Artist.

Count Werner Zytle Vertigo, a man without a place to call home after having to flee to Canada at a young age, after growing up and being involved in Organized Crime to finance his illegal activities, Vertigo returned to Vlatava to reclaim his birthright. I wasn’t too crazy for Vertigo’s design in this era, but then again I wasn’t too fond of his look preNew 52 either; his look from the Young Justice series suits him better. Lemire gives the readers a new take on the villain, ruthless and more cunning; this time he’s armed with an implant that amplifies his power and a murderous intent (But of course at this time most villains during this era were starting to blend in with each other, only way you can tell them apart was their name was and what Book you’re reading.)

Overall this was a fantastic story, it was one of the first Green Arrow Stories I thoroughly enjoyed, the last one I enjoyed of Green Arrow was Dennis O’Neil and Neal Adam’s “Hard-Travelin’ Heroes“. If you want to read War of the Clans from the beginning then I would suggest buying the DC Essentials Graphic Novel; Collects Green Arrow #17-34, Green Arrow Futures End #1 and Green Arrow Secret Origins. 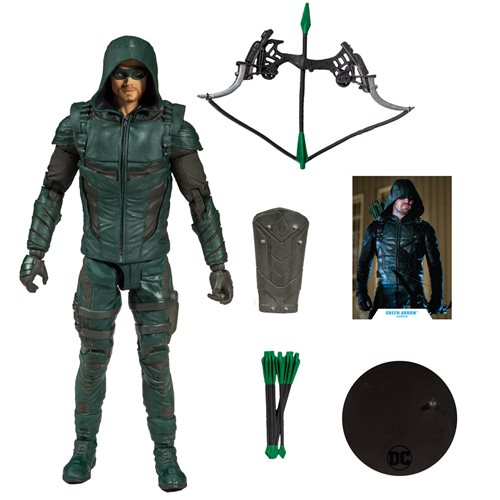 DC Comics Wave 1 Green Arrow Classic 7-Inch Action Figure is based on her look in the CW TV series Arrow. Green Arrow’s accessories include a bow with knocked arrow, quiver with bundled arrows, base, and a collectible art card with CW Arrow artwork on the front with character biography on the back. This Green Arrow action figure is an incredibly detailed 7-inch scale figure with about 22 points of articulation for a full range of posing and play and comes packaged in a window box. Following Oliver Queen’s shocking decision to turn himself over to the FBI and reveal his identity as the Green Arrow to the public, Oliver has spent the past five months in prison while his team was left behind to protect Star City. He is determined to keep a low profile to shorten his sentence for the sake of his family. But Oliver’s limits will be tested when he and team Green Arrow are pitted against the most ruthless villains they have yet to face.
Advertisements