Fresh out of the Oven! A Brand New Review!
LeSean Thomas' Yasuke nominated for Outstanding Animated Series at 53rd Annual NAACP Image Awards.
The Newest Review of My Dress-Up Darling Series Premiere is now live! The beginning of a unique relationship, click on the link in our bio for more info
Kazuya's Girlfriend Woes are making a comeback in Rent-A-Girlfriend's Second Season, coming July 2022
Emergency Meeting!
GKIDS takes fans into the Mysterious World of "U" ahead of the US Premiere of Belle, sharing two new dub clips on their YouTube Channel, read more on our website! Link is on our bio!
50 Years of Superhero Action, Kamen Rider Celebrates with a Brand New Art Exhibition
The CW Network, home for popular shows Riverdale, Nancy Drew, and DC Comics Superhero TV Shows is for sale, much to its Critics Delight.

Yesterday was an eventful Nintendo Direct, to celebrate the 35th Anniversary of Super Mario Bros. Nintendo first announced that the company will be releasing a special Game and Watch handheld console that will not only play the first Super Mario Bros. but also have Super Mario: The Lost Levels, a working clock, and an updated version of Game & Watch: Ball, with Mario as a playable character. Available for a limited time, November 13th, 2020.

Next up, another game with a limited run, Super Mario 35; running from October 1st to March 31st, 2021; this will be exclusively playable for Nintendo Switch Online users, this will let players play against 35 other players through Super Mario Bros. Courses simultaneously and the last player standing wins, the enemies defeated in one player’s course is sent to the other players’ courses.

An updated port of the popular Nintendo Wii U game “Super Mario 3D World” will be coming to the Switch, but will also come with new content that was teased at the trailer titled “Bowser’s Fury“. The port will also feature online multiplayer and new Amiibo figures of Cat Mario and Cat Peach will be available at the launch of the game. Coming your way on February 12th, 2021.

Mario Kart Live: Home Circuit. In this new Kart game, players can play with a Mario set or Luigi Set that has a built-in camera that allows players to control a physical kart and race through custom courses, to set them up in real locations. It will be available on October 16th, 2020.

Here is the game that had fans scratching their heads, not because of the choice of video games, in fact, fans have been requesting for either a sequel of Super Mario Sunshine or at least a port of the game, now they have a chance to play it again in Super Mario 3D All-Stars, the games included are Super Mario 64, Super Mario Sunshine, and Super Mario Galaxy. The Game Collection will be available physically and digitally for a limited time (that is the one that caused confusion,) on September 18th and available until the end of March 2021. 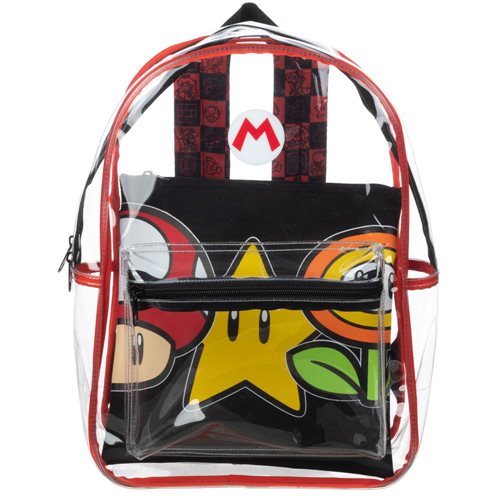 Would you believe a see-through Mario-themed backpack with a removable pouch? Believe it! Check out this surprising Super Mario Clear Backpack with Removable Pouch from Bioworld. Made of PVC and polyester, it measures about 16-inches tall x 11 1/2-inches wide x 5-inches deep and features a zip top and front pockets, a handle, colorful adjustable straps, and a vivid removable zip-close pouch displaying familiar Mario characters. Bet none of your friends have one of these! Wipe clean with a damp cloth.