Batman vs. Ra’s Al Ghul #1 pushed back to September

He may be the Demon’s Head but this delay is bothersome.

It might be Year of the Villain for DC, but it looks like one of Batman’s Rogues it might have a small delay for this Tie-In event; Two months ago we reported that Neal Adams will be writing and drawing a Batman tie-in for the Year of the Villian event involving Ra’s Al Ghul. But unfortunately, from the looks of it, there is a two-week delay; originally it was supposed to be released on August 21st but now it has been moved to September 4th. Even with the delay, issues 2 and 3 are still scheduled for September 18th and October 16th. Here is the updated Solicitation, thanks to Newsarama:

Gotham City is under siege by terrorists, and Batman is determined to find the source. But when Boston Brand tries to intervene, he discovers an even more
disturbing and deadly truth: the terrorists are led by an inhuman monster. Ra’s al Ghul has volunteered his own private security force to aid the GCPD, and now they are the only thing standing between nuclear terror and the townspeople!
But al Ghul’s true goal is hidden from everyone’s eyes. He will destroy the city and kill Batman—this time for good. Watching in horror is…Bruce Wayne?
ON SALE 09.04.19
$3.99 US | 1 OF 6 | 32 PAGES
FC | RATED T+ 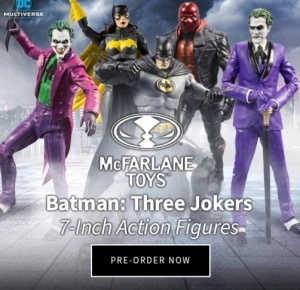